The NIGHTLITE serie, has been created through a close collaboration with Pilgaard Design Studio, which is behind the design of the luminaire serie. The products withing the NIGHTLITE serie has been developed with the desire to create a new design-classic within outdoor luminaires that easily blends into its surroundings, and at the same time excels with its simple and timeless look. NIGHTLITE consists of a street lighting (NIGHTLITE) a wall mounted luminaire (NIGHTLITE WALL) and a bollard (NIGHTLITE BOLLARD).

All products within the NIGHTLITE serie,exceeds other products on the market, as they can be delivered both with and without the luminous acrylic screen that encloses the luminaires at the bottom. This feature adds an extra element of design to the luminaire during the evening hours. In addition, all are developed with special features that distinguish them within each their product group. NIGHLITE street luminaire has been developed with an incredibly simple mounting method, which does not change the shape of the luminaire, whether it is mounted on a vertical or horizontal mast. Futhermore is NIGHTLITE designed to be easily implemented with various controls and smart city solutions. For example, it is possible to mount both Zhaga and Nema socket in top and bottom of the luminaire.

NIGHTLITE WALL has been developed with an incredibly simple and accessible mounting method. Looping of cables in the luminaire is made easy, and the luminaire can be supplied with two different wall brackets. A standard bracket for wall mounting, and a bracket where you can easily access the luminaire with visible installation in the piping.

The bollard version of NIGHTILE have been developed with ambient “back light” lighting in the body. The ambient effect encloses the entire luminaire in the evening, and gives the luminaire a beautiful appearance, and which discreetly and simply shows the path or path of the road. The elegant bollard can be selected with one or two lamp heads, for 180 ° or 360 ° distribution of the light. In addition, the NIGHLITE BOLLARD is designed with a built-in burial root bracket.

All NIGHTLITE-products has been developed as modular luminaires that can easily be reused, both because LITE as a company, through its CSR and IMPACT policies, wants to do away with the “use- and-throw-away culture”, and to support the UN’s 17 goals for sustainable development. Therefore, NIGHTLITE is a 100% modular design and can easily be upgraded in line with the technological development.

Go to our Catalogue Exterior Architectural for more inspiration, or contact us if you want to know more about our products. 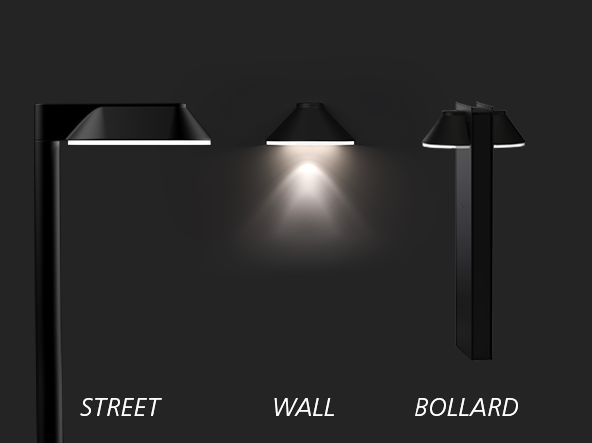