In Køge, Denmark, Tesla have now established Europe’s biggest fast-charging station for electric cars. The station is what is known as a Supercharger charging station. It can quickly charge 12 Tesla cars at the same time. It is also a showcase for the latest green technologies, including solar power cells, green storm surge protection and LED lighting.

Tesla are a company founded on sustainability: not only in terms of its production of sustainable cars, but also in terms of their many charging stations. For these, the company also chose sustainable, “green” solutions.

The actual charging stands will be situated beneath a vast carport fitted with 300 m2 of solar power cells. Tesla’s charging stands can transmit the energy from the solar cells directly into the cars’ batteries. But, if there are no cars to collect the energy, the energy will be transmitted out into the grid. Each year the solar power cells will be capable of producing 40 MWh, which is enough power to drive 200,000 km in a Tesla. However, to prevent the precious solar kWh from “being wasted” in the power grid, Tesla are working on installing a battery as a flexible means of intermediate storage. “We can see that most cars come to be charged between 6.00 am and 4.00 pm, with some peaks in the morning, at lunchtime and early in the afternoon. So we are currently trying to calculate how big the battery should be in order to achieve the best use. But we expect it to be between 100 and 200 kWh. Though it might even be 600 kWh” says Christian Marcus, who is responsible for Tesla’s Supercharger in Scandinavia. He stresses that all the power, which is transmitted to the cars, is “made green” by the purchase of certificates. *

So it was equally important for Tesla to choose the right provider for their lighting, which of course could only be LED.

Intego A/S, who are Tesla’s associates in the field of electric installation, contacted LITE. In collaboration with Tesla and Intego A/S, we began work in an effort to find the perfect solution for the new charging station. On the basis of the desired requirements, which Tesla provided, LITE found the right products to satisfy them: downlights with frosted glass in tough, high-quality materials. To define the strength and colour of the light, LITE conducted lighting calculations and 3D imaging, so that Tesla could see exactly where and how the light would fall. For Tesla, it was incredibly important for there to be sufficient light at the 12 charging stations, without it dazzling those people charging their Teslas. The selected 18W downlights were also installed with a dimming function, so they dim in periods of inactivity and achieve full power, as soon as a Tesla rolls into a charger. Park lamps were erected around the green areas, helping to indicate paths and rest areas in the vicinity of the charging station.

In addition to light for all chargers and outdoor areas, light was also required to illuminate the driveway to the charging station. Lamps from LITE’s Primo Range were installed on high masts. Their superior LED optics and advanced dimming functions make it possible to deploy daylight control. These properties enable Tesla to reduce their electricity consumption even further.

With so many green initiatives in the establishment of their new Supercharger, there is no doubt that Tesla more than live up to their desire to be a sustainable company. 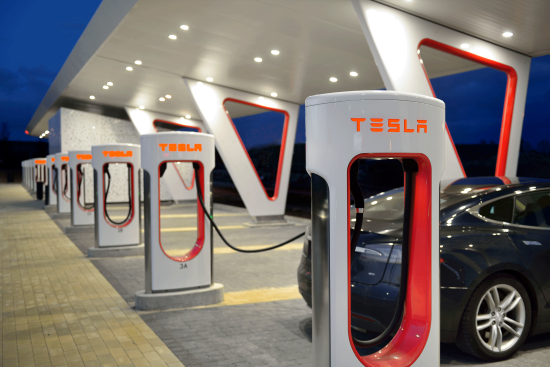