Representatives of the Sports Centre were invited to the LITE showroom, where they could draw inspiration and view exciting lighting solutions. The Sports Centre also had an energy calculation done, which showed significant savings they would make by replacing traditional fluorescent lamps with LITE’s LED tubes.

Shortly afterwards, the decision was made to replace the lighting.

The Vendsyssel Sports Centre in Vrå is the newest and most modern sports centre in North Jutland.

It was important for the Sports Centre to have at least the same lighting level as the existing one. To meet the requirements, they were one of the first sports centres in the country to have 1-10V dimmers fitted in the existing fixtures when replacing the lamps with LITE’s T5 tubes. In addition, each individual fixture has a built-in dimmable module, which allows the Sports Centre’s existing light installation to ‘communicate’ with the new LED tubes.

The replacement of their lighting means an annual saving of an impressive DKK 103,294 for the Sports Centre. They also received subsidy from Nyfors for their energy improvement, because the Sports Centre chose LED, which is a far more energy and environmentally friendly solution.

Vendsyssel Sports Centre is a dynamic cultural centre in a state of constant evolution, making every effort to be the favourite gathering place for the people of Vendsyssel. With innovation and commitment, they are taking the Centre to the next level, to be a place where people of all ages can meet up for exciting new experiences.

During the entire process, the client was in close discussion with LITE and Nyfors, seeking their advice at every stage. 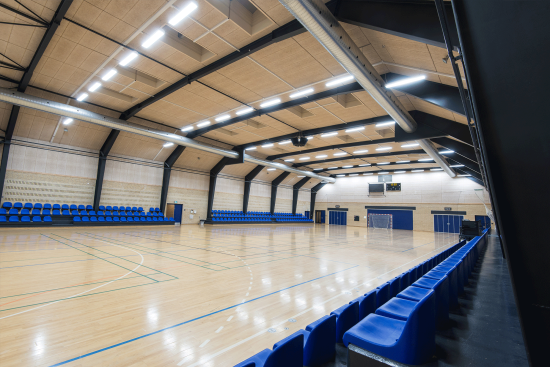